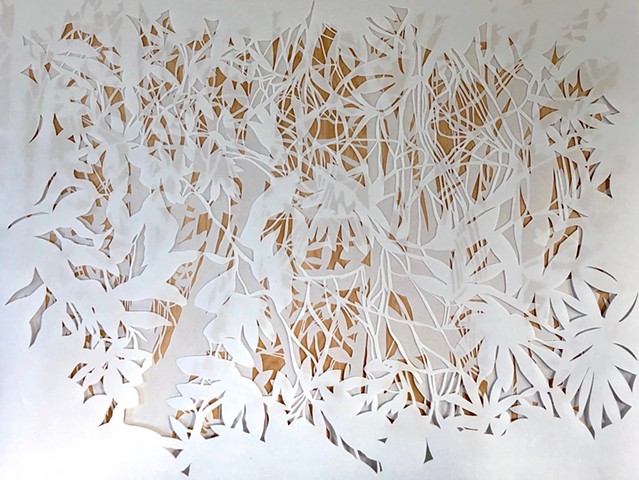 Growing up in southern Indiana, Pat developed a spiritual attachment to the natural world. Her work, rooted in direct observation, is about seeing and translating the chaotic, mysterious, layered gestures of nature. She rejects manicured sterile suburban landscapes. Because nature is not neat, her preference is a backyard of native plants for the migratory birds, bees and butterflies. She has received commissions from environmental organizations and hospitals. She believes her work is a visual voice for birds and their habitat in this uncertain time of climate change. In 2012, PBS aired the NJN State of the Arts documentary about Pat as an artist and environmentalist. The Institute of Women's Leadership at Rutgers also produced a documentary about her work. As an educator Pat gives talks and workshops on the importance of seeing and reconnecting to nature. Her work has been exhibited in museums and galleries throughout the Mid-Atlantic States. She is a two time NJ State Council on the Arts Individual Fellow, a Weir Farm Fellow and a Puffin Grant Recipient. Pat's work on endangered birds received the Curators award at the Chesterwood Museum,a residency at I-Park,a solo show and commission at the Efroymson Conservation Center in Indianapolis and a solo show and residency at The Evansville Museum. She earned a BFA from Washington University and an MFA from Tyler School of Art. Pat taught painting and drawing at The University of Wisconsin Parkside and Milwaukee, and at Kean University. She resides in Westfield, New Jersey.